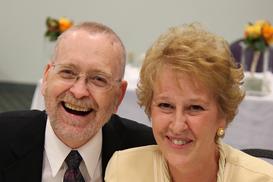 "Where Christianity is a Lifestyle, not a religion"

​Our pastor has quite a story:

When Pastor Jeff was only nine years of age, he began to experience severe

headaches and a lack of co-ordination in his legs.  After several painful (and

by today’s standards, primitive) medical tests, the surgeon concluded that he

had a tumor at the base of the brain.

The source of his symptoms was a small piece of the tumor that had dropped off and wedged between the Medulla and Cerebellum.  When the operation was performed, however, the doctor discovered that the tumor was much larger than anticipated.  Considering its size, it had been growing for at least 7 years.

It had ingrown and fused itself to the brain tissue thereby making it inoperable.  That small piece was removed and tested and proved to be malignant… and Jeff’s parents were told he had only six months to live.

Then, 12 years later, he began to experience a lightheaded feeling, with some dizziness, and headaches.  The same neurosurgeon as before was contacted and sent him for, what was at the time, a new test called “Computerized Axial Tomography” or CT scan for short.

The CT revealed two things.  First, there was a cyst growing in the left frontal quadrant of his brain.  It had gone previously undetected because the first operation was performed at the base of the brain.  This cyst had been growing prenatal (before he was born).  Taking up a large portion of the left frontal quadrant means our pastor shouldn't be able to talk, because that's where the speech center of the brain is located.  He shouldn't be able to play the guitar, because some of the fine-motor skills are positioned there as well.  –——That’s the first miracle…  There are 3 in this story!

Miracle #2 was: The tumor the surgeon had left 12 years previously had completely disappeared without a trace.  The doctor was at a loss to explain what happened, describing it as a medical phenomenon.

A second craniotomy was done to drain the cyst.  Jeff was told that he shouldn’t have any more neurological problems, and he didn’t… until 13 years later…  when that same lightheaded feeling, with dizziness and headaches returned.  Draining the cyst without removing the membranes allowed it to fill with fluid again.  This time it destroyed the olfactory nerves leaving him with no sense of smell.  It also had attached itself to the optic nerves and had to be detached… a dangerous procedure that could have left him blind.  The third miracle is that Jeff’s eyesight wasn’t effected.